Family rooms, patios and decks are some of the amenities families with small children will find in houses near the city's elementary schools and parks. Those who want plenty of room indoors can buy six-bedroom houses. The smallest houses in Arroyo Grande have two bedrooms, and there are some one-bedroom condos available. Luxury homes in Arroyo Grande have amenities such as guest suites, ocean views and entertainment rooms. Those who want large pieces of property can buy houses on 5 acres.

There are plenty of things to do outdoors and indoors in Arroyo Grande. Elm Street Park and Kingo Park have picnic tables and a playground. There are ball fields and a basketball court at Rancho Grande Park. Arroyo Grande residents can enjoy nature by riding horses or hiking along trails through oak forests in the James Way Oak and Wildlife Habitat Preserve.

History lovers can tour Heritage House or Paulding History House to learn about the area's history. Both houses were built in the late 19th century. The Santa Manuela Schoolhouse was built in the early 20th century and is open for tours.

Plays, concerts and comedy shows are preformed at the Clark Center for the Performing Arts.

Arroyo Grande residents can buy groceries at Trader Joe's, Vons, or Food For Less. Groceries, household items and clothing are also available at the Walmart in Arroyo Grande.

The public schools in Arroyo Grande are part of the Lucia Mar Unified School District. There are three elementary schools, two middle schools and one high school in the city. A few private schools are located in San Luis Obispo.

Welcome to this beautifully-maintained and spacious single-level, 3-bedroom, 3-bath home close to the Village of Arroyo Grande.  This large floor plan offers plenty of na...

Beautiful, gorgeous and stunning are just a few of the words that describe this 4 year new, 2395sq.ft., custom built home by JP Woodworks. With 3 bedrooms, 3 bathrooms, o...

This newly remodeled home was recently taken down to the studs and built back up to be a masterpiece! The hard part is over. Time for a new buyer to settle roots and figu...

Rare opportunity to purchase this large 388 acre property in Arroyo Grande. The Redemption Ranch offers end of the road privacy and is surrounded on 3 sides by large corp...

Your 3 bedroom, 3 bath beach home awaits! Centrally located in Arroyo Grande, Trillium on Grand is a special subdivision made up of modern and easy living homes that put ... 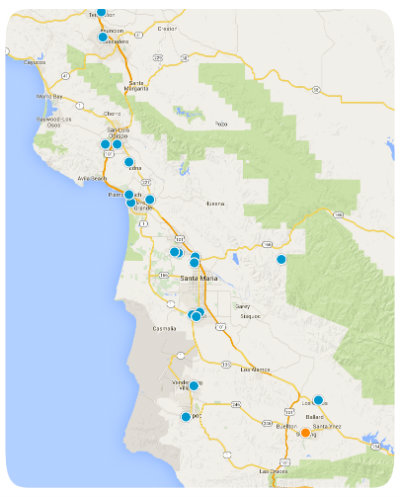